How Chlorine Works to Disinfect Pools

As steamy weather drives throngs of visitors to pools and water parks this summer, swimming facility managers are busy ensuring the health and safety of swimmers—and a significant concern with so many bodies in the pool is the risk of infection. Last summer, a study of public pools conducted by the Centers for Disease Control and Prevention found that 58 percent of the water samples collected contained E. coli bacteria; nearly 60 percent of the 160 pools sampled contained fecal contamination.

Chlorine has been used for nearly a century to disinfect pools and protect swimmers from potentially dangerous chemicals, primarily due to its versatility as a disinfectant, according to Mary Ostrowski, director of Chlorine Issues in the Chlorine Chemistry Division of the American Chemistry Council, telling LiveScience last year: “For swimming pools, chlorine is a really good broad-spectrum destroyer of pathogens that could otherwise make swimmers sick.”

In this blog post, we’ll examine what exactly makes chlorination such an effective, versatile, low maintenance method of pool sanitization.

Chlorine comes in various forms, from a granular powder to liquid to gas—and, of course, tablets. Regardless of the form, chlorine begins its work sanitizing pools and water park facilities when it is combined with water, which produces hypochlorous acid.

Hypochlorous acid is extremely efficient at killing E. coli, Salmonella and other bacteria, as well as viruses, commonly taking only a few seconds to get the job done.

The power of the hypochlorous acid compound comes from its neutral electrical charge. Since the cell membranes that encase bacteria have a net negative charge, they typically have no problem repelling other negatively charged particles in the water. But the neutrality of hypochlorous acid allows it to infiltrate bacterial cells and kill them.

Once inside the bacterial cell, hypochlorous acid attacks the cell, disrupting its normal functions, leading to the deterioration and eventual death of the cell. And a much cleaner pool.

The human body, like harmful bacteria, is composed of cells. So how can the chlorination process kill harmful contaminants without endangering the swimmers themselves?

It’s all about balance. The water in each pool, hot tub, and water park ride has a pH level between 0 and 14, which represents how acidic it is. If a pool’s pH level is too high, for example, the hypochlorous acid will take much longer to work, potentially endangering swimmers. So, the CDC recommends a chlorine concentration between one and three parts per million, with a water pH level between 7.2 and 7.8 in order to avoid eye and skin irritation and make sure the chlorine properly neutralizes dangerous chemicals.

In the near-century that chlorine has been used to disinfect pools, safety concerns have always surrounded chlorine use, particularly in its gas or liquid bleach forms.

However, Axiall’s Accu-Tab® system minimizes these concerns by reducing the risk of leaks, spills, and inconsistent chlorine levels, so facility managers can chlorinate and disinfect their pools properly, easily, and predictably. In addition, the system allows facility managers to easily adjust chlorine levels based on variables like weather and swimmer load. It’s also cheaper, compared to alternative chemicals like bromine—resulting in a low-maintenance, pool-disinfecting solution perfect for busy facility managers.

Click here (PDF) to learn more about how an Accu-Tab chlorinator can help sanitize the water in your commercial pool, spa, or water park. You can also watch an interactive demo here. Interested in Accu-Tab? Click here to send a message to our team or call us at 800-245-2974. 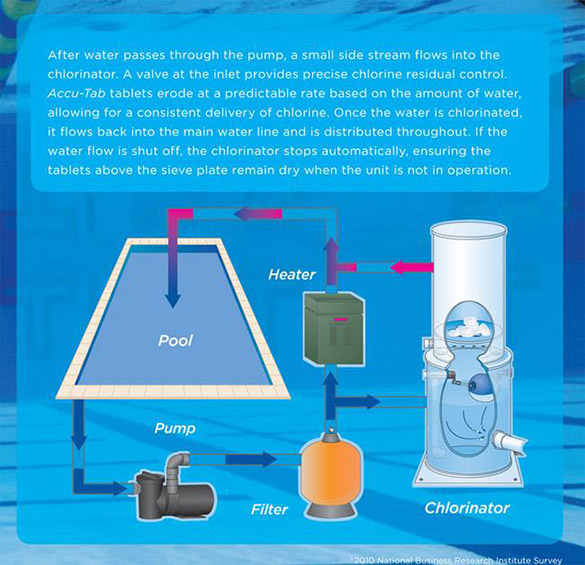