How grave is the current water crisis in the Western U.S.? The water shortage has affected all 22 states west of the Mississippi. In addition, 98 million people in the Southwest are dealing with decreased water availability. California Governor Jerry Brown has announced a mandatory 25 percent cutback in water consumption in all cities, as the drought is already affecting more than 50 million people in the region. It’s no surprise that agricultural output is suffering in the region as a result: Wheat and rice production are already significantly down from annual averages, with fruit and nut production also at risk. 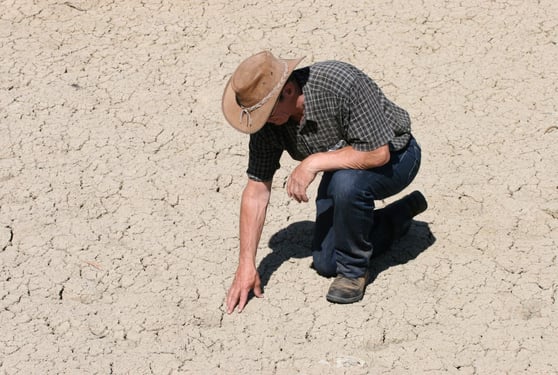 Cause, Effect and Consequence

Why is this happening? For growers in the region, it’s been a “perfect storm” of factors: high temperatures, little precipitation and historically low snowpack have all chipped away at California’s water reserves. And according to climatologists at the Jet Propulsion Laboratory, man-made climate change is likely to make future drought cycles even worse. In fact, NASA scientists estimate that California only has about one year’s worth of water left in its reservoirs.

How might this affect agriculture on the West Coast? To give some perspective, about 80 percent of California’s water supply was dedicated to agriculture in 2011, according to the California Department of Water Resources – compared to 20 percent used by urban areas. This ratio is primed to shift even further if projections are accurate. Growers in California were forced to abandon more than 400,000 acres of farmland in 2014, and it’s estimated they’ll leave behind more than one million acres in 2015. Government-mandated diversion of agricultural water to the public is a very real possibility.

For growers and consumers alike, the consequences are serious. With the majority of California’s agricultural land used for high-end products like pistachios, almonds, and wine grapes, growers are facing the prospect of seeing these cash crops die out, losing out on millions of dollars in revenue.

Earlier this year, the California senate passed a $1.1 billion aid package to quell the effects of the drought, including assistance for food laborers. The package also aims to divert $128 million to provide direct assistance to workers and communities impacted by drought and start a Water Action Plan. However, the Jet Propulsion Laboratory remains cautious about how much of a difference this legislation will make. Climatologist Bill Patzert said that, even with this response, its current levels of water use are unsustainable for the long term.

How a Drip System Can Help

What can growers in California and others with limited water supply do to lessen the consequences of droughts and agricultural water shortages? Of course, conservation is key — as well as maximizing the quality and output of the water used.

In efforts to conserve water and reduce waste, growers should note that the market is moving largely away from spray and furrow irrigation methods toward drip irrigation. Drip irrigation systems can help growers save as much as 80 percent of water compared to older methods. With this system, water is applied to the crop in droplets instead of a stream, either directly to the surface near the plant or in the soil near the plant's roots. This process maximizes crop output during droughts by reducing weeds, which typically grow when there is excess water in the plant's root zone.

Drip irrigation also results in a more even distribution of water throughout the field. This eliminates the need to water the whole field and reduces evaporation of water in the soil, particularly when drip irrigation is used in conjunction with plastic mulch. Growers looking to conserve water should explore the possibility of installing a drip irrigation system on their farms.

When implementing a drip irrigation system for the first time, growers should be aware of some common complications and best practices to help avoid problems. First, drip irrigation lines have small holes that are used to create the droplets but can make lines more susceptible to algae, slime, iron, bacteria and other buildup. Not only can this “gunk” contaminate water and damage the end product; it can also reduce the system's efficiency by creating “dead zones,” parts of the field that receive little or no water.

Facing a diminishing water supply, growers all over the world must figure out the best ways to manage their agricultural water. So how will they stay afloat over the next few decades? By embracing more efficient irrigation technology and investing in long-term water distribution strategies to help prevent  algae, slime and bacteria buildup in drip lines, growers can better stand up to these challenging drought conditions.