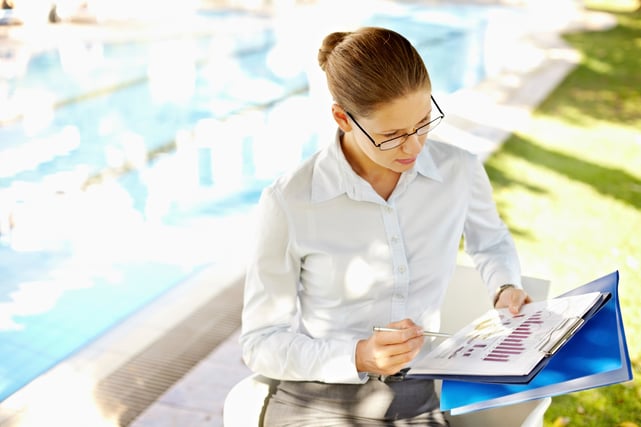 A survey conducted by Axiall’s Water Treatment business, in partnership with the National Association of City and County Health Officials (NACCHO), revealed that inspectors polled were well qualified to spot problems. For example, 68 percent held Certified Pool Operator (CPO®) or Aquatic Facility Operator (AFOT™) accreditation, and 80 percent received on-the-job training. Experience is a dominant trait across the profession — the survey also revealed that 90 percent of inspectors had been inspecting aquatics facilities for at least four years.

The NACCHO-Axiall survey also showed that 76 percent of inspectors follow the standards and codes set by their local governments. These guidelines are in addition to state or national mandates. So it is in the best interest of any pool operator to know and adhere to the standards of their jurisdiction. Not only does this help ensure the safe and smooth operation of a pool or spa, these standards also safeguard against accidents, drownings, and improperly treated water. 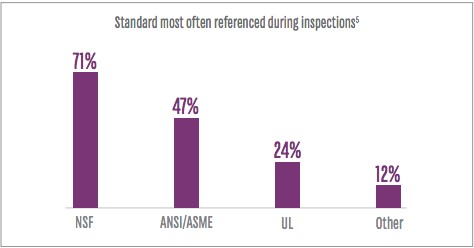 In the survey, local health departments were asked to name the standards that they most frequently referenced in inspections.

As noted above, NSF International standards are the most frequently referenced by inspectors, with most adhering to the equipment standard NSF/ANSI Standard 50 for Pools, Spas, and Recreational Water. Accredited by the American National Standards Institute (ANSI), NSF has developed more than 80 voluntary public health standards and maintains a helpful online database cataloging all certified equipment and products that are compliant with NSF/ANSI Standard 50. The database can be viewed on the NSF’s website.

It is important to note that NSF certification is strictly tied to the manufacturers’ instructions for use. For example, if using a chlorination system like Accu-Tab® to chlorinate a pool, it is mandated that only Accu-Tab Blue SI calcium hypochlorite tablets be used. Substituting other chemicals could result in inconsistent chlorine delivery rates and potentially dangerous situations. Simply put, using any chemical other than that specified for the feeder by the manufacturer and NSF will void the product's certification. That’s why it’s so important not only to ensure that equipment is NSF-certified, but also that staff is knowledgeable about equipment, its operation and maintenance, and that all manufacturer instructions are followed.

The American Society for Mechanical Engineers (ASME) establishes standards for equipment and adheres to the definitions of industry consensus outlined by the American National Standards Institute (ANSI). ASME standards provide technical definitions and guidelines for designers, manufacturers and users to promote safety and reliability of engineering components. This is the second most commonly followed standard, behind only NSF certification.

One of the most relevant ASME standards to pool operators is the Virginia Graeme Baker Pool & Spa Safety Act (P&SS Act), which was enacted by Congress in 2007 to prevent drain entrapments and eviscerations in recreational pools and spas. All pool drain covers must comply with the standards found here.

While NSF and ANSI/ASME standards are the most common, 24 percent of survey respondents also referenced UL Standards. UL is a global safety science company that develops standards across six industries, including “Life & Health,” and has developed several standards for pool equipment and complementary products, including pool and spa water treatment products, electric water heaters for pools and tubs and swimming pool pumps, filters and chlorinators. To review UL’s searchable standards database, use the UL Standards Catalogue.

Finally, pool operators should also familiarize themselves with the Model Aquatic Health Code (MAHC). Posted in August 2014, this document was developed by the National Centers for Disease Control and Prevention and outlines science-based best practices for ensuring that swimming and other recreational water activities are as healthy and safe as possible. The entire code can be read online.

Pool inspectors are here to protect you, your staff and your swimmers from hidden dangers in and around your facility. The standards inspectors adhere to were developed to ensure all equipment, chemicals and processes are working toward a clean, safe and compliant pool. Being aware of the standards health inspectors use will help you be prepared the next time your pool is up for review. 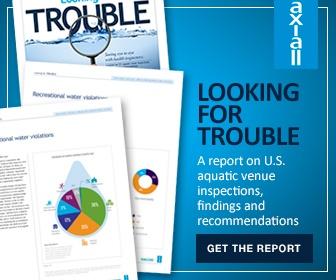